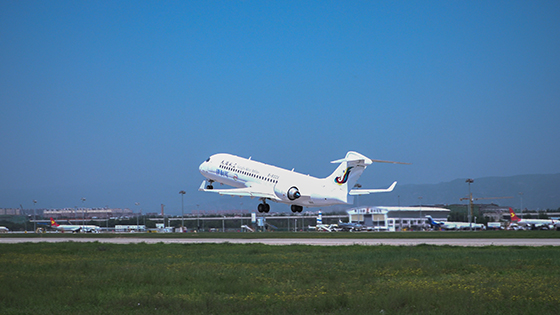 In the best season of Inner Mongolia grassland, an ARJ21 aircraft of Genghis Khan Airlines, which was the first to carry out a commercial flight, took off from Hohhot Baita International Airport with the civil aviation dream of Inner Mongolia people, and arrived at Ulanhot smoothly, completing its inaugural flight on July 26th, 2019. This marks the official passenger-carrying operation of Genghis Khan Airlines, and starts a new journey for the commercial operation and market-oriented development of the China-made jet.

Mr He Dongfeng expressed that we should firmly follow Xi Jinping Thought on Socialism with Chinese Characteristics for a New Era and the spirits of the 19th CPC National Congress, and solidly promote the healthy and steady development of commercial aircraft industry. COMAC would insist on the principle of being customer-centred, being quality first and safety foremost, keeping faith and living up to expectations, in order to make new and greater contributions to the development of Inner Mongolia and the trunk liner career of China.

Mr Dong Zhiyi expressed that Inner Mongolia has a vast territory and scattered population, so air transportation is very suitable for the travel of people in Inner Mongolia. Genghis Khan Airlines had been the first local airlines in Inner Mongolia and shouldered glorious missions, so it should actively integrate itself into the overall situation of the economic and social development and the high-quality development of civil aviation; and should remember that safety is a top priority, uphold zero tolerance for potential safety hazard, and provide more satisfactory operation services of China-made civil aircraft for passengers.

Mr Hao Yutao express that inaugural flight was the first step in a long march, and Genghis Khan Airlines should try its best to provide quality service for passengers and continuously improve the transportation network in Inner Mongolia; should live up to the great trust and belief, adhere to the enterprise philosophy of hard work, warmth, overall care, safety & high efficiency, and common growth, remain true to the original aspiration, remember the mission, and make new contributions to the economic and social development of Inner Mongolia.

Under the shining light of the Party’s national policy, with the care of CAAC and other departments and the support of the Party Committee and the government of Inner Mongolia Autonomous Region, Genghis Khan Airlines came into being to meet the development requirements of the times, marking a solid step for Inner Mongolia Autonomous Region to develop local aviation enterprises. After Genghis Khan Airlines was approved to make preparations, the staff of Genghis Khan Airlines overcame various difficulties with the love of the company and China-made civil aircraft, completed all the preparation work with joint efforts, obtained the Public Air Transport Operator’s Certificate in January 2019, and set sail on July 26th, 2019. CAAC North China Regional Administration issued a Large Aircraft Air Carrier Operations Certificate and Operation Specifications to Genghis Khan Airlines at the inaugural flight ceremony.

Genghis Khan Airlines has been committed to establishing air bridges connecting inside and outside Inner Mongolia Autonomous Region and improving the travel efficiency of residents and tourists in the region. The first batch of round trips between Hohhot and Ulanhot and between Hohhot and Xilinhaote have been opened. Genghis Khan Airlines plans to increase its fleet size to 25, increase the number of navigable points to 40, and increase the number of operational routes to 60 within five years; build a regional aviation network covering all airports in the region; and increase the flight density to realize the public transport by air between league cities and the capital.

With the receipt of two ARJ21 aircraft, Genghis Khan Airlines has become the first operator of a fleet purely composed of China-made jets in China. With a vast territory and abundant air routes, Inner Mongolia enjoys unique geographical and airspace advantages in the development of regional aviation. In order to operate ARJ21 aircraft successfully, Genghis Khan Airlines has striven to train a large number of special personnel for this aircraft, learned the operation characteristics of this aircraft in winter, established risk control and maintenance systems, and cooperated with Chengdu Airlines to jointly promote the large-scale operation of ARJ21 aircraft.

In addition, Genghis Khan Airlines has joined hands with COMAC and Ordos municipal government to start the construction of projects such as Trunk Liner College, training center and flight test base, in order to deliver talents in time for the development of civil aviation industry in Inner Mongolia, promote the development of China-made commercial aircraft industry, and boost the economic transformation and upgrading of Inner Mongolia.

ARJ21 aircraft has excellent performance in severe cold and plateau conditions, and especially could meet the requirements of take-off and landing at the airports in mid-western & north regions of China and obstacle clearance along complex routes. At present, a total of 13 ARJ21 aircraft have been delivered to customers. Chengdu Airlines, as the first operator of ARJ21 fleet, has successively opened more than 20 routes in more than 20 cities and carried more than 400,000 passengers.

COMAC will always adhere to the principles of customer-centred and market-oriented, carry out the tasks such as design optimization, batch production and delivery, and operation support in a down-to-earth manner, strive to provide markets and customers with aircraft which are safer, more economical, more comfortable and more environmental-friendly, accelerate to make up for the shortage of Chinese civil aircraft supply, and make new contributions to building China into a manufacturing power. While carrying out safe operation, Genghis Khan Airlines will also strengthen the close cooperation with CAAC and COMAC, make unremitting efforts in collecting feedback information, optimizing design and guaranteeing docking in order to explore a market-oriented and commercialized road for China-made aircraft with good market response and rapid development, and steadily promote the vigorous development of China-made commercial aircraft industry. 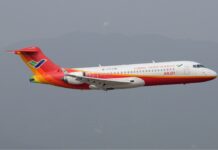