The capacity in Asian traffic decreased by 2.9 per cent and the traffic measured in Revenue Passenger Kilometres by 3.3 per cent year?on?year.

The capacity in European traffic grew by 5.4 per cent and traffic measured in Revenue Passenger Kilometres by 0.3 per cent year?on?year.

In April, the cargo capacity in scheduled traffic, measured in Available Tonne Kilometres grew by 2.7 per cent and Revenue Tonne Kilometres decreased by 4.2 per cent year-on-year.  Cargo load factor in scheduled traffic was 55.1 per cent. The cargo overall figures reflect a structural change from the comparison period, as Finnair withdrew from the use of leased Nordic Global Airlines freighter aircraft capacity in Asian traffic. In April, the cargo traffic consisted almost entirely of belly cargo on scheduled flights.

Traffic statistics for May are published on Monday, 8 June 2015. 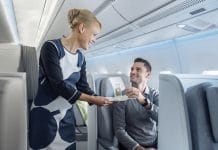