Etihad Airways has announced the introduction of a new scheduled service linking Abu Dhabi, capital of the UAE, and Barcelona, Spain, effective 21 November 2018. The route will initially be operated five times a week by a two-class Airbus A330-200 before becoming a daily operation from 31 March 2019.

Barcelona will become the second city in Spain served by Etihad Airways, complementing the airline’s existing daily service to the capital Madrid. The new link will provide business and leisure travellers with convenient timings to travel between Abu Dhabi and Barcelona, also providing seamless onward connections through Abu Dhabi to major cities in the Indian Subcontinent, Southeast Asia, China, Japan, Korea and Australia.

Peter Baumgartner, Chief Executive Officer Etihad Airways, said: “As one of the largest unserved markets from our Abu Dhabi base, Barcelona – a hub of culture, commerce, tourism, education, fashion and science, has witnessed a significant increase in travel demand from the emirate, and from across our wider network.

“We are now delighted to announce the first direct link between these two important global hubs. We are confident it will prove very popular with UAE and Barcelona-based customers, allowing us to extend our acclaimed inflight service, hospitality and flair to this vibrant Mediterranean city, and to build on the flourishing cultural and commercial ties between the UAE and Spain.”

The Catalonia region is immensely popular with business and leisure travellers alike. With 7.5 million inhabitants, beautiful mountain scenery and a 214 kilometre Mediterranean coastline, the region is rich in natural parks and protected areas. Barcelona is one of the world’s most visited cities, famed for its unique culture, Gaudi architecture, history and cosmopolitan lifestyle.

Trade between the UAE and the Catalonia region has enjoyed significant growth in recent years, with food, chemicals, motor vehicles, energy and pharmaceuticals being the main industrial sectors.

Barcelona has recently been ranked by the International Congress and Convention Association (ICCA) as the city which hosted the most international association meetings in the world in 2017, overtaking Paris, Berlin and Vienna to claim first place for the first time since 2004. Etihad Airways will increase frequency to the city to meet passenger demand for the Mobile World Congress, which takes place from 25-28 February 2019.

The new service is being launched in time for the start of the 2018 Formula 1 Etihad Airways Abu Dhabi Grand Prix, the Middle East’s largest sporting event, held from 23-25 November at the capital’s 5.55 kilometre Yas Marina Circuit.

Barcelona is one of the busiest cruise ports in the world and an important source market of cruise traffic for Etihad Airways. Abu Dhabi has also emerged as one of the leading cruise destinations in the Arabian Gulf region, with over 329,105 cruise tourists visiting the city during the 2017 season. The new direct service between the two cities will ensure Abu Dhabi remains a leading player in the region’s cruise travel ambitions.

Etihad Airways operates an extensive codeshare partnership with Air Europa (UX), on the Spanish airline’s scheduled services from Madrid to Barcelona and 18 other major European cities. 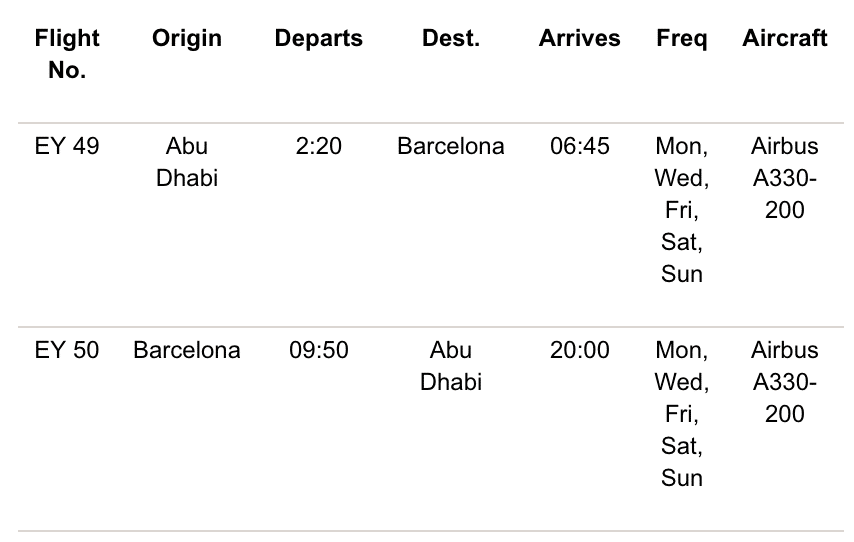 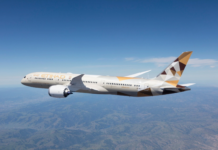 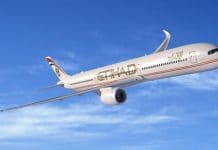