Etihad Airways is celebrating 10 years of flying to the southern Indian state of Kerala with the introduction of additional flights to the popular destination.

The airline has launched a fourth daily non-stop service between Kozhikode and its Abu Dhabi hub offering convenient onward connections to cities worldwide. The extra capacity takes to 63 the total number of weekly services between Abu Dhabi and its three Kerala gateways of Kochi, Kozhikode and Thiruvananthapuram. This represents over 30 per cent of Etihad Airways’ frequencies from across 11 Indian cities it serves.

Kerala’s international appeal as a travel destination, famed for ayurvedic treatments and the world-renowned backwaters, has elevated it into one of India’s top tourist destinations. It has been a core part of Etihad Airways’ Indian operations over the past decade and a global network that now spans cities across all continents. Key destinations for travellers from Kerala include Abu Dhabi, the Gulf region, London, New York and Chicago.

Since Etihad Airways’ first flight to Kerala on 31 May 2007 when it inducted services to Thiruvananthapuram, followed two days later by the inaugural Kochi flight, the airline has flown almost 3.5 million guests to and from the state. The Kozhikode route was launched on 1 August 2008.

The current capacity includes four flights a day to Kozhikode; thrice-daily to Kochi and double daily to Thiruvananthapuram. The Kerala flights are operated with a mix of Airbus 320 and A321 aircraft featuring up to 16 seats in Business Class and 158 in Economy.

In addition, strategic Indian partner Jet Airways operates seven flights a week from Kochi to Abu Dhabi. The services largely cater to the huge expatriate population from all three Kerala cities and the surrounding areas, living and working in the Gulf region.

Addressing media at a briefing in Thiruvananthapuram today, Neerja Bhatia, Etihad Airways Vice President Indian Subcontinent, said: “With our multi-frequency scheduled flights to and from Kerala, Etihad Airways has demonstrated a commitment to this vibrant state by offering convenient global access and boosting the domestic tourism industry.

“We have been able to bring the world closer to this beautiful state and connect the people of Kerala to destinations in the Gulf, including our Abu Dhabi home, which has also been the base for thriving ventures by Kerala business houses. Reaching a 10-year milestone is fitting tribute to the support Etihad Airways has received from the state government of Kerala in making our operations a success.”

Dr Venu Vasudevan, Principal Secretary Kerala Tourism, said: “Kerala Tourism is delighted to learn of the extra flights launched by Etihad Airways, which adds more connectivity to Kerala. We congratulate Etihad Airways on a decade of flying to Kerala and look forward to conducting several joint initiatives to promote the many diverse destinations across our state.”

During 2017, Jet Airways is scheduled to launch flights from Kannur and Chandigarh to Abu Dhabi, subject to appropriate regulatory approvals and completion of operational readiness at these airports.

With the strong network of Etihad Airways and its partner airlines, travellers are able to connect in as little as two hours over Abu Dhabi to and from diverse cities across the world. For those travelling to the United States, they are able to take advantage of the unique US Preclearance facility that provides immigration and customs clearance at Abu Dhabi International Airport.

Guests arrive in the United States as domestic passengers enabling them to collect baggage quickly and take any onward connections without delay. 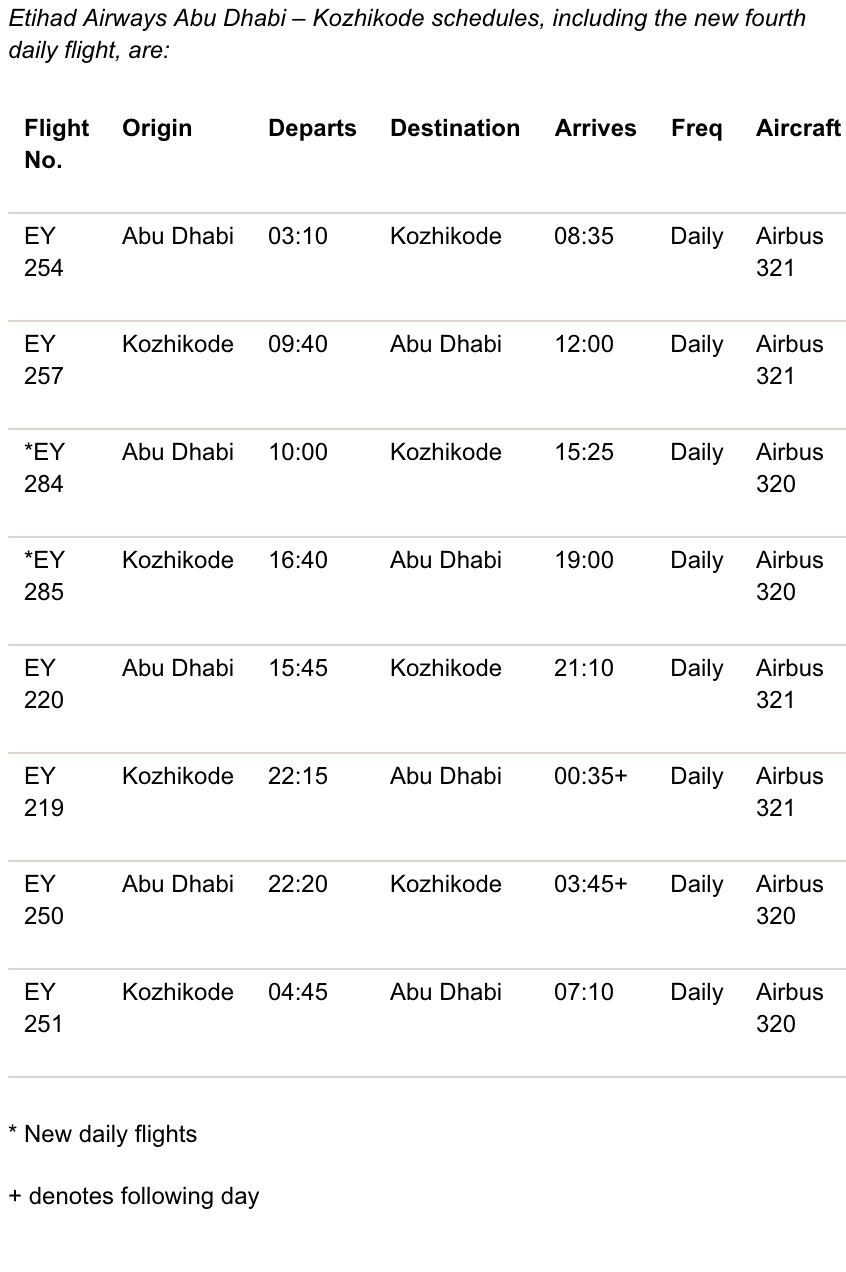 For the fourth year in a row, Etihad Airways reports a massive loss

Eurowings flight approaches Olbia Airport, but the airport is closed