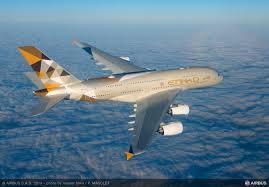 Etihad Airways, the national airline of the United Arab Emirates, launched its first A380 service to London Heathrow in the early hours on Saturday 27 December.

The double decker aircraft will operate on EY11, one of the three daily London Heathrow services, departing at 2.35 am and arriving at the world’s busiest airport at 6.35am. By August 2015, every Etihad Airways flight between Abu Dhabi and London will be an A380 service.

Etihad Airways unveiled the A380 to an audience of 200 media at a high profile gala in Abu Dhabi on Thursday 18 December, having taken delivery of the aircraft from Airbus in Hamburg earlier in the week.

Guests travelling on the inaugural flight will be given a commemorative A380 certificate as well as passport holders and luggage tags. Guests will also have complimentary wi-fi access and the airline will host social media activities during the flight.

James Hogan, President and Chief Executive Officer of Etihad Airways, said: “The response from air travellers to our new A380, particularly The Residence by Etihad™ penthouse suite, has been incredible and we’re delighted to introduce the aircraft into commercial service.

“This last week has seen the successful final testing and preparations for the inaugural historic flight to London Heathrow and we look forward to welcoming guests onto the A380 aircraft at Abu Dhabi Airport.”

The Residence by Etihad™ is a three room suite – with living room, bathroom and bedroom – that offers a level of luxury and privacy normally associated with private jet travel.

Located in the forward upper section of the A380 The Residence by Etihad™ offers guests a personal Butler who, for the inaugural flight, will be British national, Georgina Henderson.

Georgina and other Etihad Airways Butlers have all received specialist training at the Savoy Butler Academy in London prior to the launch of the A380.

The A380 also features First Apartments, which are fully private suites with a separate reclining lounge seat and full-length bed, as well as a chilled mini-bar, personal vanity unit and wardrobe.

The Economy Smart Seat also debuts on the A380 and has enhanced comfort with the unique ‘fixed wing’ headrest on each seat.