DUBAI, U.A.E. , 9th December 2014: Emirates has announced plans to offer a double daily service to Barcelona, less than three years after its initial launch to the city.

From 2nd May 2015 Emirates will add a further 3724 seats per week to Barcelona increasing overall capacity by 51 percent. The extra service will be operated by a Boeing 777-200LR in a three class configuration, complementing the airline’s already successful daily A380 service. Timings for the new flight have been scheduled to create and facilitate more effective connections between Barcelona and key cities in the Far East, Middle East, Australia and Africa, via Emirates’ Dubai hub.

“Barcelona continues to be a huge success story for Emirates. In less than three years we have not only launched a new service but also added significant capacity in order to keep up with customer demand. This extra daily flight is a major boost to our operations and firmly underscores our commitment to the Spanish market,” said Hubert Frach, Emirates’ Divisional Senior Vice President, Commercial Operations, West. 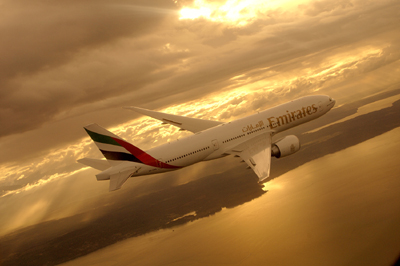 “Customers love the Emirates product and repeat usage continues to play a key role in our success. Our onboard product and service is second to none and we are committed to offering seamless connections for our customers both in and out of Barcelona. It’s no surprise that we have been able to increase capacity on this route so quickly,” added Mr. Frach.
Barcelona frequently tops the must see destinations in Europe with over 7.3 million tourists visiting annually, making the city the 11th most visited destination in the world.

The introduction of a Boeing 777-200LR will also add significant cargo capacity to the route with just over 230 tonnes per week to be added by Emirates SkyCargo. This additional capacity is expected to further support the movement of clothes, one of Catalonia’s main exports to the Gulf.

The new flight will offer eight luxurious First Class Private Suites, 42 lie-flat seats in Business Class and 216 seats in Economy Class. Emirates customers in all classes will enjoy over 2000 channels of inflight entertainment on ice in addition to gourmet cuisine and a generous baggage allowance of 50kg in First Class, 40kg in Business Class and 30kg in Economy Class.

In addition to Barcelona, Emirates also operates a double daily service to Madrid. Emirates first launched flights to Spain in 2010 and now offers a total of 21,042 seats per week to and from the country.

Emirates takes off to Mexico City via Barcelona

In a deal worth $16 billion, Emirates Airline and Airbus announce order for 50 Airbus A350-900

Norwegian now charges for bringing your bigger hand baggage on board