During its meeting on 29 April 2020, the Federal Council decided to provide support to the airlines Swiss and Edelweiss to bridge liquidity shortfalls. In order to resume flight operations, airlines are dependent on the services provided by aviation-related businesses at the national airports. Consequently, these businesses should also receive support if necessary, provided that the stringent conditions imposed by the Confederation can be met. The Federal Council has asked Parliament for guarantee credits totalling just under CHF 1.9 billion.

Aircraft movements at Swiss national airports have more or less ground to a complete halt. Airlines and aviation-related businesses in the areas of ground handling and aircraft maintenance are faced with the threat of liquidity shortfalls. The aviation industry is an economically critical infrastructure: prolonged interruption to Switzerland’s international links would involve substantial economic losses. During its meeting on 8 April 2020, the Federal Council thus decided to examine measures to support the aviation industry. Financial support is subject to strict conditions. In particular, sufficient collateral must be available. The state will play only a secondary role. First and foremost, the companies and their owners are required to implement all reasonable measures. The funds guaranteed by the Confederation may be used solely for Swiss infrastructures (no outflows to parent companies abroad), and funds generated in the future must be used primarily to repay the liquidity assistance (no dividends or intra-group repayments or transfers until the loans have been fully repaid).

The in-depth clarifications have revealed the following:

The Federal Council is petitioning Parliament for guarantee credits totalling CHF 1.875 billion: CHF 1.275 billion to secure the loans to Swiss airlines and CHF 600 million to support aviation-related businesses at the national airports. The guarantee credits correspond to the upper limit of the Confederation’s financial commitment. Unlike the guarantees for airlines, aviation-related businesses could soon experience a need for direct financial support in the form of loans or, in the case of hive-off vehicles, also in the form of financial interests. To enable the Confederation to react quickly if necessary, the Federal Council is requesting a supplementary credit of CHF 600 million at the same time as the guarantee credit.

The necessary contracts with the parties involved (banks, airlines) will not be concluded until the guarantee credits have been approved by Parliament.

Under the current Civil Aviation Act, the Confederation may grant contributions or loans to Swiss aviation for the operation of scheduled routes. The Confederation may take a stake in airlines or aerodrome companies if this is in the general interest. It is currently impossible to support aviation-related businesses. This legal basis is to be created by amending the Civil Aviation Act. To enable a rapid response if needed, the requisite legislative amendment is to be discussed by Parliament under the accelerated procedure during the special session from 4 to 8 May 2020. 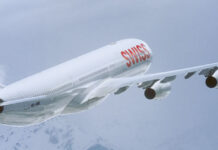 SWISS extends Premium Economy Class to its Airbus A340 fleet