Condor continues to fly: the German government and the Hessian state government have pledged their support through a guarantee for a loan from the federal government’s Corona Shield Programme. Condor will receive a loan of 294 million euros as corona aid, as well as 256 million euros to fully refinance the bridging loan that the leisure airline received for last winter following the insolvency of Thomas Cook.

The EU Commission has given its approval already. Condor had applied for the guarantee in order to prevent liquidity bottlenecks caused by the immense impact of the Corona pandemic on air traffic and to repay the existing loan despite the withdrawal of the contractually agreed new owner PGL (Polish Aviation Group). Condor flight operations are thus secured.

“As an operationally healthy and profitable company, Condor has gotten into trouble for the second time in almost half a year through no fault of its own – once by Thomas Cook and then by the effects of the Corona pandemic. We are very grateful to the Federal Government and the Hessian State Government for their support and would also like to thank all our customers, partners, service providers and supporters for their encouragement and trust,” said Ralf Teckentrup, CEO of Condor. “Our employees, in particular, have surpassed themselves in recent months and have more than fulfilled the trust placed in us. Even though the coming period will be a challenge, especially as an airline, we are confident that through the dedication, commitment and passion of each and every one of them we will continue to fulfil the trust placed in us”.

Due to the travel warning and the entry bans on travellers from Germany, Condor is unable to fly condorguests on holiday in the destination areas during these days and therefore primarily carries medical equipment in the cabin and the hold. In the past two weeks, the leisure airline has already brought more than 23 million face masks, two million gloves and hundreds of thousands of protective suits to Germany. In addition, Condor flies numerous harvest workers from Romania to Germany to help farmers to secure their harvest. In this way, Condor makes a significant contribution to maintaining basic medical and goods supplies in Germany. In addition, since mid-March, the leisure airline has brought more than 78,000 travellers from all over the world back home in close cooperation with the German Federal Foreign Office, tour operators and cruise lines. 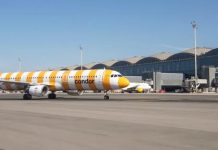