Monday morning at Brussels-Midi, a night train (from Vienna) will be welcomed for the first time since the end of 2003, at the initiative of the Austrian national railway company ÖBB.

The Belgians has their last night train service in 2003, which linked, in particular, the stations of Bressoux (Liège) and Schaerbeek (Brussels) to the south of France and to Italy.

Until today, Belgium was no longer included in Europe’s night train network, with foreign operators balking at the cost of running trains on the country’s railway network.

ÖBB’s commitment to expanding its offering comes after the company took over Deutsche Bahn’s network of sleepers in 2016, and is buoyed by extra demand for rail services partly as a result of growing attention over the climate impacts of flying.

In Belgium, the first sleeping train was put into circulation by SNCB in 1956 with the link Ostend – Brussels – Munich. In 2003, however, the board of directors decided to abolish night trains, mainly because of the increase in charges requested by foreign networks.

16 years later, night trains are now back in Belgium with a connection, twice a week, between Brussels and Vienna. The first train will leave Vienna tonight at 20:38. Slightly later, another train leaves from Innsbruck. The two trains join at Nuremberg and,  after 14 hours of travel and 15 stops including Cologne, Frankfurt, Liège and Brussels-North, the convoy is expected at Brussels-Midi station tomorrow at 10:55.

Belgium is thus connected to the “Nightjet” network of the Austrian operator ÖBB, which announced the new service in October last year, as the latest addition to its night service to destinations in Austria, Germany, Switzerland and Italy.

The Nightjet to Belgium will run twice a week, Sunday and Wednesday from Austria (Vienna and Innsbruck), Monday and Thursday from Brussels.

The cheapest available one-way ticket costs €29.90, offering the barest minimum of comfort: an ordinary seat without couchette. A couchette pushes the price up to €119, with a sleeper costing €229. 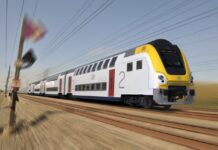