Kuwait Airways said on Twitter that Flight 118 from New York to Kuwait was struck by the Chinese plane as it was parked before takeoff. The passengers were taken to hotels as they waited for alternative flights, the airline said. 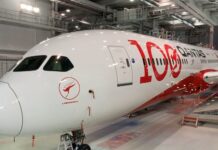