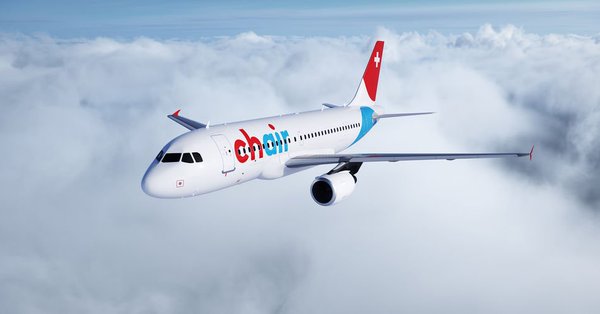 A new and fresh Swiss airline is commencing operations under the name of Chair Airlines. This is the successor to Germania Flug AG, which has operated at Zurich Airport since 2014.

It has long been speculated, but now it is official: the latest Swiss airline is called Chair Airlines. The new airline is the successor to Germania Flug AG in Switzerland. “We have used the challenging situation over the past few months to prepare our relaunch, and our new brand is now cutting a fresh figure in the world of Swiss aviation”, comments Chair CCO and Supervisory Board member Urs A. Pelizzoni.

We had very clear reasons for choosing the name Chair. “Firstly, it represents the seat that you book on one of our flights. Secondly, with different colours used for the letters (red for ch and blue for air) in the new logo, the name also represents our Swiss heritage – but above all is a clever play on words”, explains Pelizzoni.

By choosing the name Chair, the Zurich agency Branders, which was responsible for the relaunch, brings the essence of the airline into focus: a fresh, straightforward, and dynamic company that treats its partners, customers, and employees in a lighthearted, humorous, respectful, and approachable manner, while also being a little cheeky at times. “In a young company with flat hierarchies and a lack of bureaucracy, you can choose to do things differently at times and have the courage to stand out in the market. The choice of the name Chair already demonstrates this clearly”, comments Branders CEO René Allemann.

The recent rebranding and the change of name to Chair Airlines AG as of July 1, 2019, are key stages in the intensive transformation process that Germania Flug AG has been undergoing since the start of 2019. Over the past few months, all operations, as well as the booking platform and numerous workflows and processes, have been reviewed, modified, and overhauled.

“Our relaunch is more than just a rebranding – it is a rebirth”, comments Urs A. Pelizzoni. With its new image, the airline has now visually and legally separated itself from its green-and-white past, but will continue to safely, securely, and reliably fly its passengers to their desired destinations. The airline has also retained its former service concept, meaning that all taxes and fees, soft drinks, and, depending on the flight time, a snack or hot meal are still included in the price of the flight. The Flex and Flex Plus tariffs also include one piece of hold baggage; with the Basic tariff, this can be added for a surcharge.

The first Airbus A319 has already been given the new Chair design. The red-and-blue logo is clearly emblazoned on the front of the fuselage while the tail fin bears a section of the red dot from the ‘i’ in the logo together with a Swiss cross. Otherwise, the entire aircraft is simply a clean and subtle white. In the future, the external image will play with with the red-and-blue “i”, which can be tilted slightly to resemble a passenger in a seat. The two other Airbus A319 aircraft in the Chair fleet will be given the new design very shortly.

Despite changing its name, the airline is still retaining the same strategic positioning. This primarily relates to its excellent working relations with tour operators and travel agencies. The sale of individual seats (now via www.chair.ch) as well as the subcharter, ACMI, and ad-hoc activities will all continue without interruption. Chair Airlines is also remaining true to its former strategy with regard to destinations: flights will be available to popular Mediterranean destinations in Europe and North Africa, as well as cities off the beaten track such as Beirut, Ohrid, Prishtina, and Skopje. The range of flight destinations will be further expanded in the future, “but we still remain committed to customer-oriented and sustainable growth”, comments Urs A. Pelizzoni.

More information: Chair Airlines currently operates out of Zurich with three 150-seater Airbus A319 aircraft and employs 150 staff in the cockpit, as cabin crew, and in administration. It is the successor to Germania Flug AG in Switzerland. Chair Airlines is owned 50.01 percent by Schweizer Albex Aviation AG and 49.99 percent by Polish charter airline Enter Air. Its website: http://www.chair.ch

SPOTTED in Pristina (PRN): HB-JOH, @Airbus A319 Chair Airlines, Switzerland’s newest airline, the successor of Germania Flug. The two other A319s in the Chair fleet will be given the new design very shortly. Video: Fatlind Obërtinca. @AirbusPRESS @aviation24_be @flightradar24 pic.twitter.com/UPkhqu3Fxb