Former CEO Andrew Cowen had been removed from his post, two people with knowledge of the matter said.

On September 24, HK Express abruptly cancelled 18 flights scheduled to fly to and from Hong Kong, Seoul, Osaka and Nagoya from October 1 to 8 – ruining the travel plans of about 2,000 passengers during the busy “golden week” period.

The company had lost three key safety trainers and a training manager in August. Aviation24.be understands that the resignations came following a dispute with senior managers and caused significant disruption for more than 700 cabin crew and pilots, who could not fly until their safety licences were renewed.

The Civil Aviation Department (CAD) demanded the airline provide more details and explain how it would deal with the situation. It again requested an update in early September.

The airline replied that it had found a short-term remedy, which was to hire two coaches who had earlier resigned with two others hired on contract terms. 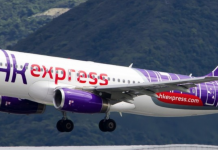