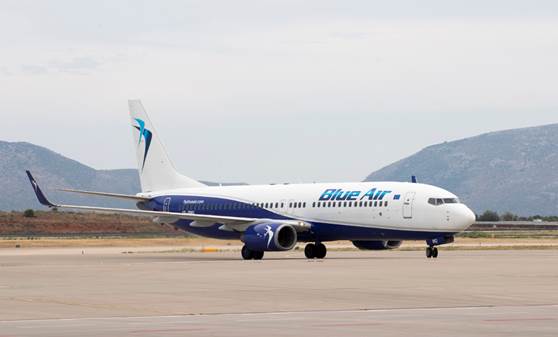 Blue Air has launched its Greece services in late April from Romania and it is now operating 17 weekly frequencies to 5 Greek destinations under the Summer 2021 Schedule. Blue Air is flying from Bucharest to Athens, Heraklion, Rhodes, Mykonos and Zakynthos, and from Bacau to Athens with ticket prices starting from 19.99 euro / one way, taxes and one free change included.

As part of its positioning strategy as Romanians’ first ultra-low-cost air transport option, Blue Air focuses on expanding its network and providing efficient connections with destinations of major interest for both the leisure and the business segment, at the most affordable travel rates.

Blue Air is operating 17 direct weekly flights between Romania and Greece under the Summer 21 Schedule, with the following frequencies:

Krassimir Tanev, Chief Commercial Officer, Blue Air: “We are truly happy with our Greek network opening this year as this was a very highly demanded market by our customers. Starting with this Summer 21 Blue Air is not only launching its first direct service to Greece, but it is becoming the largest airline between the two markets to the benefit of our customers who can now enjoy more travel options at affordable prices starting at 19,99 EUR”

Athens International Airport’s Communications & Marketing Director, Ioanna Papadopoulou: “We are truly excited to see our long-standing partner, Blue Air, dynamically operating to the Athens market this summer, with an enhanced network to/ from Athens, thus offering a wide range of options to the travelling public. On our part, we are fully committed to stand by our airline- partner and substantially support their successful operations to our market”.