Once firm, order will mark over 400 A320neo sold in Latin America

Synergy Aerospace Corporation, Avianca’s largest shareholder and owner of Avianca Brasil, has signed a Memorandum of Understanding (MoU) with Airbus for 62 A320neo Family aircraft. The agreement paves the way for Avianca Brasil to base its fleet renewal and network growth strategy on the A320neo Family.

“These 62 A320neo aircraft will make it possible for Avianca Brasil to take an important leap toward growing and modernizing its fleet, while improving passenger experience,” said German Efromovich, Chairman of Synergy. “Thanks to their excellent eco-efficiency, reliability and comfort, the A320neo Family will allow Synergy to strengthen its position in Latin America by offering Avianca Brasil passengers the best single aisle product available.”

“Airbus is proud that Avianca Brasil will rely on the unmatched productivity and fuel efficiency of the A320neo to renew its growing fleet and expand its network in South America,” said John Leahy, Airbus Chief Operating Officer, Customers. “The A320neo Family will deliver Avianca Brasil with enhanced performance capabilities in key airports such as Santos Dumont in Rio de Janiero.”

The A320 Family is the world’s best-selling single aisle product line with more than 11,700 orders to date and over 6,500 aircraft delivered to 400 customers and operators worldwide. The newest member of the A320 Family, the A320neo, incorporates many innovations including latest generation engines and Sharklet wing tip devices, which together deliver more than 15 percent in fuel savings from day one and 20 percent by 2020. With more than 3,800 orders received from 72 customers since its launch in 2010, the A320neo Family has captured almost 60 percent share of the market.

Once the order is firm, Airbus will have sold 407 A320neo aircraft to seven customers in Latin America — Avianca, Azul, Interjet, LATAM, Synergy, VivaAerobus and Volaris. With more than 950 aircraft sold and a backlog of almost 500, nearly 600 Airbus aircraft are in operation throughout Latin America and the Caribbean. In the past 10 years, Airbus has tripled its in-service fleet while delivering more than 60 percent of all aircraft operating in the region. In May, Airbus celebrated its 500th aircraft delivery in Latin America. 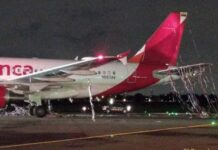