The airline will operate direct flights between the Faroe Islands and Keflavik on Mondays and Fridays year-round, and from Easter also on Wednesdays.

The new route between Vagar and Oslo is scheduled for every Wednesday throughout the year, and from Easter through 16 October, an additional flight will be scheduled every Sunday.

From 7 April to 22 December, Atlantic Airways will be running regular flights between Vagar and Edinburgh every Monday and Thursday, and from 12 May to 17 October, there will also be flights to and from Paris on the same days.

Direct scheduled flights between Vagar and Gran Canaria have been scheduled from 2 November 2021 to 15 February 2022.

Atlantic Airways, based in the Faroe Islands capital Vagar, gas a fleet of 2 Airbus A319, 1 Airbus A320, 2 Airbus A320neo aeroplanes and 2 AgustaWestland AW139 helicopters. The airline is owned by the Islands’ government. 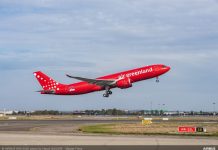 Widerøe doubles capacity between Bergen and the Faroe Islands