Inspired by KLM’s sponsorship of the Curacao Marathon, KLM Netherlands has this year engaged in partnership with the TCS Amsterdam Marathon, which will be held for the 40th time today. The event has attracted 45.000 runners from 104 different countries, including 100 Flying Blue participants and 100 KLM employees.

“KLM has good reason to support a second marathon, after golf, running is the most popular sport among our frequent flyers. The online community Flying Blue Running has no fewer than 25,000 participants. It’s a sport you can do anywhere in the world. That makes it interesting to us, because many of these people will fly KLM. The marathon connects participants and visitors with KLM in a social, sporting way. Moreover, running is a healthy and sustainable sport, which is something we support as a responsible employer.„
Harm Kreulen, Managing Director KLM The Netherlands

Organised by Sportevenementen Le Champion, the Amsterdam Marathon is the Netherlands’ biggest marathon and also one of Europe’s largest. The event includes a full and a half marathon, as well as an 8-km Business Run and a 700-metre Kids Run for children aged 4 through 12. The event starts and finishes in the Amsterdam Olympic Stadium. KLM welcomes participants of its Flying Blue loyalty programme at a special venue in the stadium. 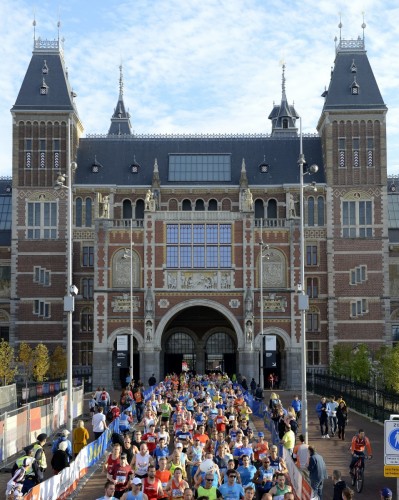