Air Canada today announced new non-stop services to begin next summer from Toronto and Montreal, including three new destinations in its global network – Bucharest, Zagreb and Porto – and a new route between Montreal and Lisbon. 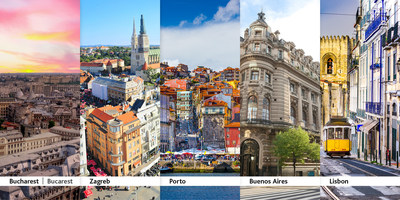 In addition, the airline will enhance existing year-round service between Montreal and Casablanca by transferring the route to Air Canada mainline from Air Canada Rouge.

“Today’s announcement further solidifies Air Canada’s position as a leading global carrier. With these new services, Air Canada becomes the only North American airline flying to Romania and we are now offering the most weekly seats and frequencies from Canada to Portugal and Croatia,” said Benjamin Smith, President, Passenger Airlines at Air Canada. “Moreover, with our modernized fleet we are able to enhance our existing services, by deploying our Boeing 787 Dreamliner on a new non-stop route to Buenos Aires. Together, these new and enhanced services will provide customers greater comfort and choice, as well as the ability to conveniently connect onward through our extensive North American and International network, on North America’s Best Airline as rated by Skytrax.”

The new services announced today are now on sale*. This includes special introductory, all-inclusive round-trip fares such as $899 for Bucharest–Toronto/Montreal and Zagreb–Toronto; $799 for Toronto–Porto and Montreal–Lisbon; $622 for Montreal–Lima; and $1,228 for Toronto–Buenos Aires.