In the afternoon of 7 June, Air Belgium had organised a press conference for the Hong Kong journalists at the luxury 5-star hotel The Murray, in the presence of Belgian Consul General for Hong Kong and Macau, Ms Michèle Deneffe. The aim was to present the new Belgian airline and its connections between Belgium and Asia.

The next morning, the inaugural flight returned to Belgium. Two buses brought the Belgian participants from the hotel to the airport. It was surprising to see Charleroi mentioned on the departures board without any mention of Brussels South.

Upon check-in, the Belgian guests were given a voucher for the Hongkong Airlines lounge.

Due to bad weather, the flight was rather heavily delayed. At first, the aircraft was towed late from its remote position to Gate 24.

And once everybody (included a first group of some 50 Chinese tourists) was on board, there was an additional ATC delay. And finally, after pushback the plane still had to wait before take-off, being number 5 in the queue (12 additional minutes, according to the captain).

Almost immediately after boarding a stewardess came along with glasses of sparkling wine. Air Belgium’s CEO Niky Terzakis was again in the economy section, two rows behind me.

After reaching the cruising altitude of FL321, the cabin crew distributed earphones, pillows and blankets (all with the AB logo) and provided hot towels.

A business menu was offered to the guests in the Economy section (not sure the Chinese tourists got the same advantage, but I know by experience from the rehearsal flight that the regular economy menu is also good). A delicious menu, with a choice of dishes. I selected the second starter and the first main course. Haagen-Dazs ice cream was served as dessert.

The dishes were no longer based on Belgian products, as in the outbound flight, but this is due to the fact that the catering was provided by Cathay Pacific (feeding a competitor!). All the drinks were Belgian though, the beers (of course), water from Chaudfontaine, the wines and the liqueurs.

During the meal, the aircraft passed over the Gobi Desert, where it climbed at FL341 (still those odd numbers over China). Like in the outbound flight, there were still many changes in direction to avoid sensible military zones. 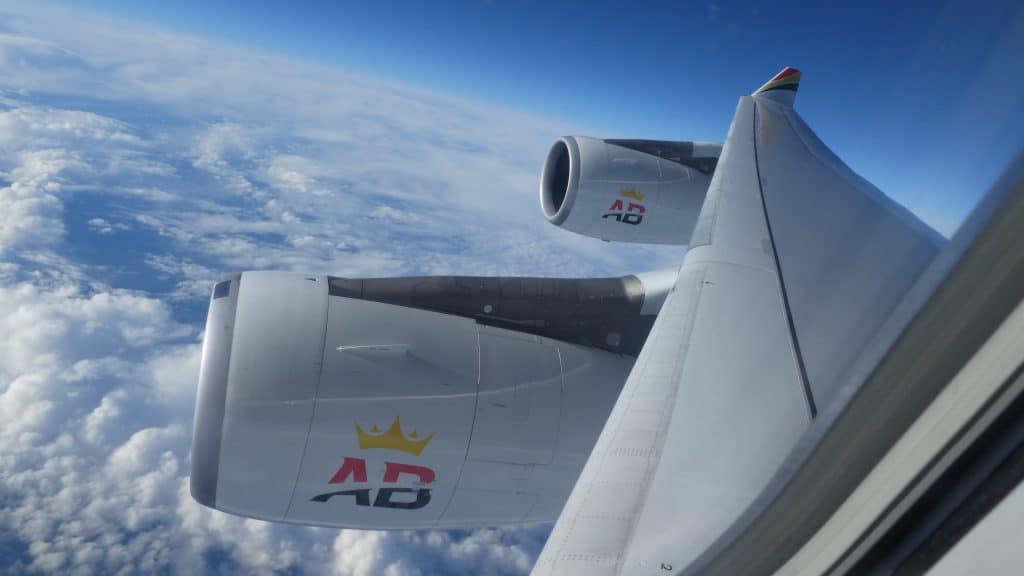 Although all the flight was in daylight, many people went into a nap after the meal.

Arriving in Kazakhstan, the aircraft regained a “normal” altitude after another climb: FL360, and later, after crossing the Ural mountains, up to FL380 until the final descent into Charleroi.

The captain Robert Denis (who is also the Director of Flight Operations) was accompanied in the cockpit by two First Officers for such a long flight. He visited the cabin for a chat (and some jokes) with several passengers who had gathered in the forward economy cabin for a little party (the aft cabin was occupied by the Chinese tourists, and the business cabin was mostly asleep!).

Three hours before arrival, a dinner was served, again with a choice of two dishes, one of them Chinese: that was, of course, my selection.

The flight continued uneventfully until the landing on runway 25 in Charleroi, approximately two and a half hours late, but nothing due to Air Belgium itself: the bad weather at Hong Kong leading to ATC restrictions was probably the main reason, strong headwinds during the flight providing for an additional delay. That made it the longest flight in my life (beating my Madrid-Lima flight of 2015: 12 hours, also on an A340, but with the -600 suffix).

Apart from the delay, the flight was excellent. Was it due to the presence of the five top managers of the airline (the Chairman Eric Bauche, the CEO Niky Terzakis, the Flight Operations Director Robert Denis, the Cabin Crew Director Kurt Abeloos, the Ground operations Director Mickaël Clermont)? I don’t think so: the staff looked very dedicated and smiling. Keep it that way!

Ryanair to link Klagenfurt, Austria, with Brussels South Charleroi and 3 other airports in winter 2022/23